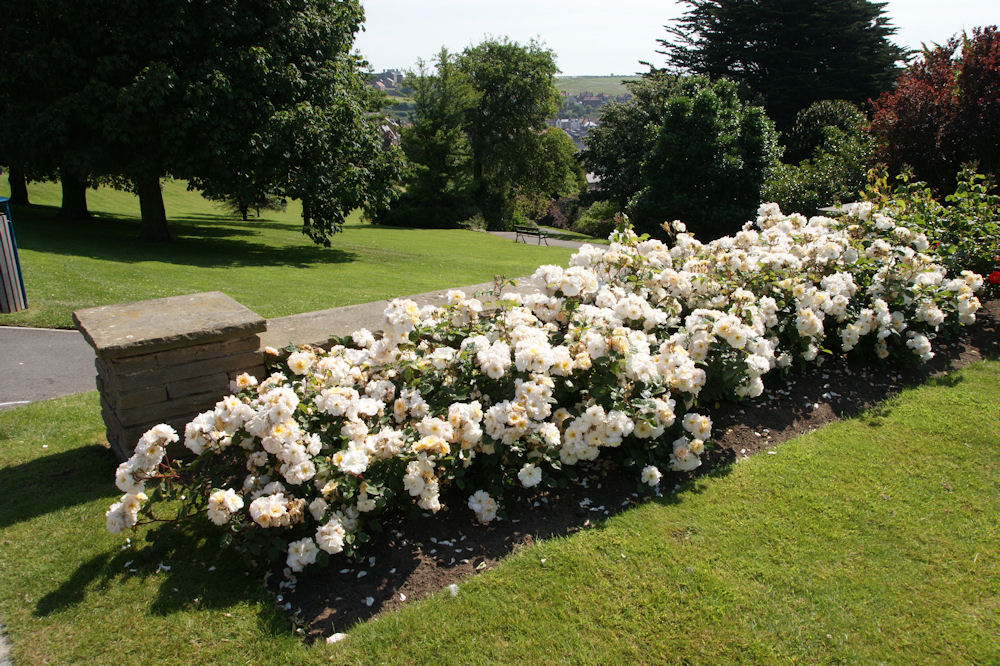 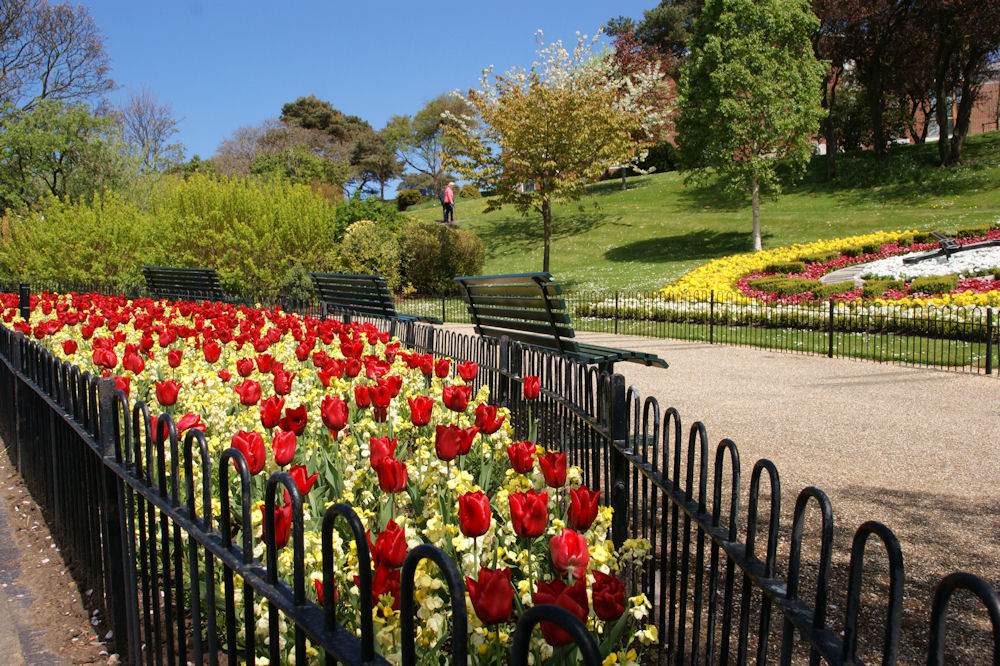 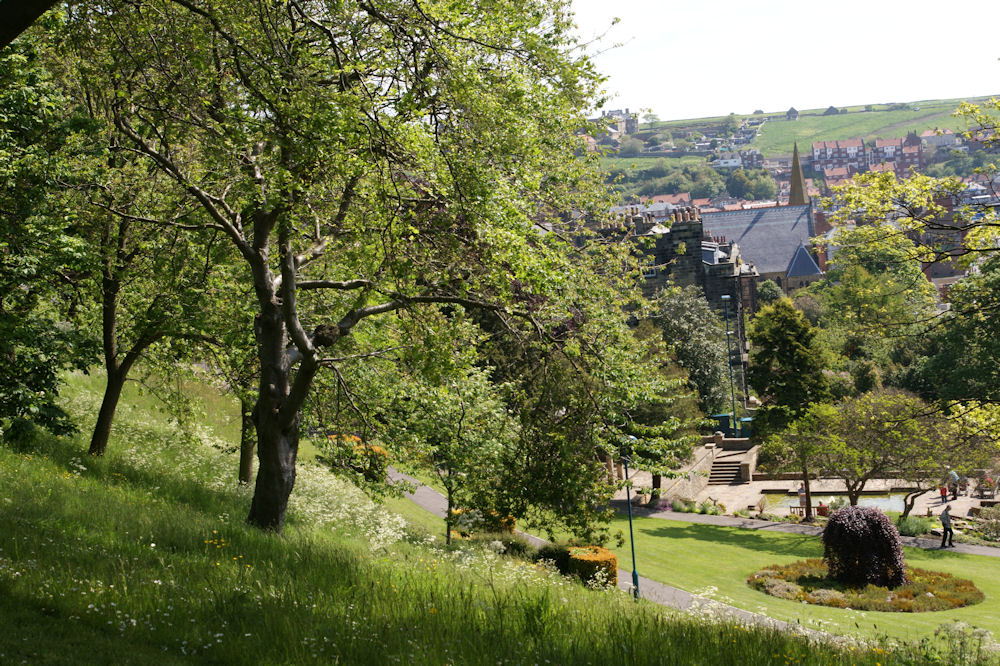 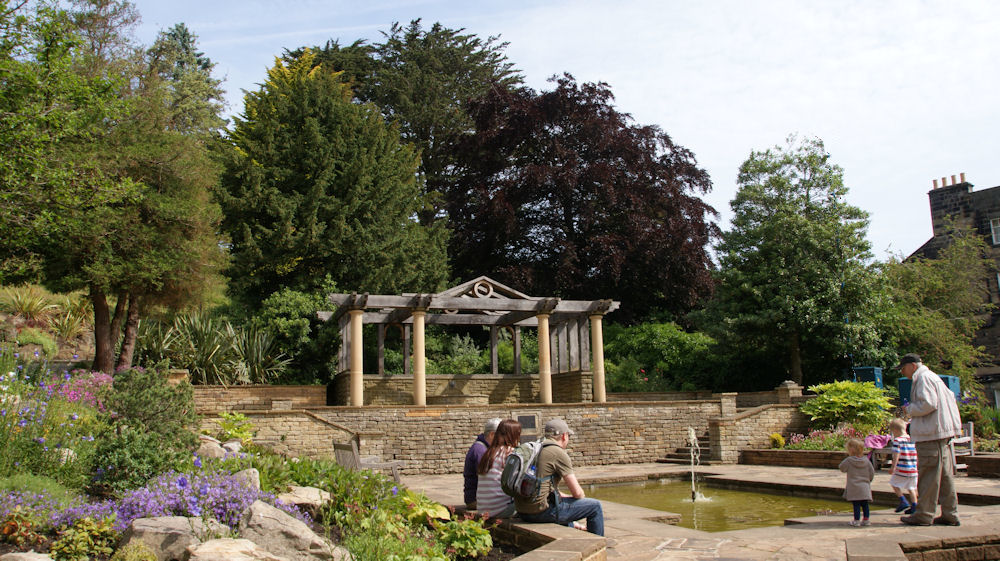 Following the park's restoration in 2010 the planting continues to be reviewed regularly. The style reflects that of the 1930s.

Autumn and winter colour can be found in the stems of cornus, rubus, the bark of Prunus serrrula (cherry) and Platanus acerifolia (London Plane) and in the foliage of acers and Ailanthus altissima (Tree of Heaven). There are many specimen trees of interest throughout the park including Araucaria araucana (Monkey Puzzle tree), Catalpa bignonioides (Indian Bean tree), Pyrus domestica (pear) which pre-date the park and Quercus petraea (Sessile Oak). Bulb displays make a spring visit well worthwile, look out for the crocus river on St. Hilda's Terrace, and traditional bedding displays provide seasonal colour.The Jurassic Garden is planted with ferns, palms and specimen trees such as Trachycarpus fortunei and Ginkgo biloba. The planting in the South Seas Garden (Little Park) reflects that of the southern hemisphere with phormium, hebe and olearia. Stone turtles swim through a sea of crocus and hyacinth in spring.

The half moon beds at the Floral Clock were redesigned with sustainable planting using ferns, grasses & hemerocallis. The borders in South Seas Garden were replanted with aucuba, hebe & Taxus baccata prostrata. Spraying of acanthus in Union Steps rockery (under redevelopment) continued. Wisteria floribunda 'Naga Noda' were planted on new supports in the main drive border, and W. floribunda longissima alba on the museum walls. In autumn a Cornus controversa variegatea, a salix caprea & a fagus sylvatica purpurea were planted. Hyacinth & Narcissus Tete a Tete were planted in various locations.

February. A hedgerow of whips was planted in the South Seas Garden. When mature these will provide food & shelter for wildlife, & include Salix caprea, Prunus spinosa, Viburnum opulus, Crataegus monogyna & Cornus sanguinea.

March. Projects started last autumn were completed by new planting. The following were added to the walls of the museum:Trachelospermum jasminoides, Wisteria sinensis 'Alba', Actinidia kolomikta, Rosa 'Geoffrey Smith' & Garrya elliptica 'James Roof'. Lonicera periclymenum 'Serotina' were planted on the arches of the Community Garden & Magnolia soulangeana were planted in the Jurassic Garden. Mycorrhizal fungi were used in the planting holes to aid quicker establishment & water retention. A donated Magnolia grandiflora was planted in the museum bed.

Summer. Taxus baccata replaced failed aucuba on Chubb Hill, & as part of the redevelopment of Union Steps rockery thuggish acanthus was sprayed off. A small wildlife pond & bog garden with many native plants were developed in a quiet corner of the park. This year the Community Garden was managed by the Friends. It has thrived & been well used.

Autumn. Thousands of Narcissus 'Carlton' & N. 'Mount Hood' were planted on the banks, & N. poeticus 'Actaea' in the South Seas Garden. A Euonymus alatus was added to the winter border & a Cercidiphyllum japonicum (Katsura tree) was planted at the site of the former Park Keeper's cottage.

Autumn. Five Pinus strobus were planted above the Jurassic Garden. Narcissus 'Actaea' were planted in the Community Garden & N. 'Mount Hood' near the Jurassic Garden. Work started clearing unattractive planting from Union Steps, the area was then turfed & underplanted with crocus. Pruning of the overgrown shrubbery on Union Terrace was carried out. The jasmine threatening to take over the walls of the Museum terrace was removed, & a planting list of replacement climbers produced. To support RHS 'Greening Grey Britain' & the Rotary Club 'Purple4Polio' campaign, Crocus tommasinianus 'Ruby Giant' were planted on the play area bank with the help of local school children. Funded with a grant from North Yorkshire County Council, 80 Rosa 'The Yorkshire Regiment' were planted in the Rose Garden.

Winter. Tree works were carried out in South Seas Garden, including removal of a mature sycamore threatening to destabilise a wall & crown lifting of others.

November. The letters EIIR in the Floral Clock, formerly depicted in annual bedding have been replaced with Buxus sempervirens. This will add structure throughout the year.

The rectangular beds that were part of the embankment's bedding display have been reshaped to complement the existing elliptical beds. Dot plant globes of Ilex 'Golden King' have been added.

May. Ranunculus bulbosus (St. Anthony's turnip) is flowering in one of the wild flower areas. This is the less common form of Ranunculus acris (Meadow Buttercup).

March. 2500 Galanthus nivalis in the green (snowdrops) have been planted in the neolithic circle near the Commemorative Garden with the help of pupils from Airy Hill C. P. School. Funded by Beacon Farm & Friends of Pannett Park this project supports the Snowdrop Appeal at Scarborough Hospital for a bereavement suite. Two Taxus baccata aurea fastigiata have been planted in the Commemorative Garden.

January. Changes are taking place to the area of the former Park Keeper's Cottage. An area of indifferent planting has been cleared revealing a tilia (lime) previously concealed. Three Taxus baccata have had their tops reduced to return them to a neater shape. The rhododendron bed has been reshaped & the planting increased.

Roses. Rosa 'Just Joey' & R. 'Deep Secret' have been added to the Rose Garden & to the main drive border.

The wild flower embankment. Rhinanthus minor seed (yellow rattle) has been sown on the embankment. This semi-parasitic plant attaches itself to the roots of grasses reducing their vigour. This allows a greater variety of wild flowers to develop.

Changes to the Bedding Display.

Four beds that display the annual bedding at the sun dial have been re-shaped to form two larger elliptical beds. This will create an imposing display and allow for more height in the planting. Heritage dahlias and pelargoniums will be incorporated next summer.

The Harry Eatough Rose project. This historical rose bed has become degraded over time, the roses lacked vigour and flowered poorly. These have been removed, soil dug deeply and enriched. Using micorrhizal fungi at the roots of the new plants, floribunda roses in pastel shades have been introduced to the bed. These will compliment the existing planting of Lavandula 'Hidcote', Rosa 'Mermaid' and Clematis 'Perle d'Azure'.

Climbing Plants. Rosa 'New Dawn' are now established on a wall of the museum, and Clematis 'Niobe' have been introduced to complement the roses.

Bark Chip Mulch. A thick layer has been spread over beds and borders to conserve moisture and reduce weed growth.

Lily Pool. A major improvement of the planting has been made possible by a local sponsor. Archive photographs from the 1920s and 1930s guided the choice of plants which provide height, structure, ground cover and seasonal interest.

Twin rockeries. Overlooking Chubb Hill: the planting has been redesigned by the Friends of Pannett Park. The plants are suited to the prevailing conditions and provide structure, colour and seasonal interest.

Roses and Clematis. State-of-the-art metal obelisks made by a local craftsman have been installed in the Harry Eatough Rose Bed, sundial borders and the long herbaceous border. The roses chosen for these are partnered with an appropriate clematis: Rosa 'Mermaid' with Clematis 'Perle d'Azure', R. 'Creme de la Creme' with C. 'Etoile Violette' and R. 'The Generous Gardener' with C. 'Ascotiensis'. A donation from a national company has made possible the purchase of 24 clematis alpina and macropetala to accompany the roses on two pergolas. These will add colour early in the year before the roses flower, and produce fluffy seed heads for winter interest. Two Clematis montana 'Elizabeth' which are sweetly scented clothe an archway.

Autumn Bulb Planting. Over 800 autumn and spring flowering bulbs have been added to the twin rockeries and beneath an area of cornus. 2400 narcissus 'Carleton' have been planted on the embankments.

Peony Steps. Peonies lost to this area have been reintroduced together with a mix of herbaceous perennials and evergreen shrubs. The sculpture of the Eternal Gardener was designed by the Friends' chairman and fabricated locally.

A river of 15,000 crocus bulbs 130m in length was planted in the autumn of 2011 running down St. Hilda's Terrace to the South Seas Garden. Over three days 40 children from local schools worked with the Friends of Pannett Park and council staff to complete this exciting project. A stand of overgrown leylandii and holly was removed from a corner of the museum. This has let light into a formerly dark, unattractive area allowing future planting to thrive. The tree stumps were ground out and the soil dug over and enriched with organic matter. A Cedrus atlantica glauca (Blue Atlas Cedar) has been planted with a drift of Narcissus Tete a Tete.

The rose garden has been completely renovated. Failing roses were removed and replanted elsewhere in the park in enriched soil. Soil was removed from the existing beds and 200 tonnes of fresh loam enriched with organic matter dug in. Mycorrhizal fungi were applied to the roots of the new plants to help develop sound root systems. The roses sourced locally comprise Hybrid Musks, Floribundas and Hybrid Teas, all chosen for their vigour, reliability, disease resistance and scent.

The twin herbaceous borders have been replanted in a style to reflect the Gertrude Jekyll border on the main drive. Existing plants were used elsewhere in the park. Obelisks matching others in the park have been installed.

Fernery
A dark, damp, uninspiring corner near a main entrance has been transformed by the planting of ferns including Dicksonia antarctica, and Hostas 'Sum and Substance' and 'Big Daddy' whose leathery leaves are less attractive to slugs.

The primitive style planting has been boosted by the addition of more ferns, phyllostachys, pinus, Trachycarpus fortunei and Rhus typhina (Stag's horn sumach).

Wild Flower Project
As part of the park's restoration plans were drawn up to introduce wild flowers to certain areas. Wild flowers provide an alternative to lawns and traditional borders, they provide a display for months and grow in difficult areas with poor soil and on slopes. Most importantly wild flowers provide a rich source of pollen and nectar which are food for essential pollinating insects such as bees, butterflies and insects which are in decline.
The best plants for attracting pollinators are native varieties, often with single open blooms and visible stamens and pollen. Flowers of different shapes and heights are desirable too, e.g. digitalis and crocus, and those with successional flowering.

An area of grassland on the embankment was identified as suitable for wild flowers and allowed to grow uncut throughout the summer of 2011. This allowed us to see which wild flowers were already present. Conopodium majus (pignut) and Anthriscus sylvestris (cow parsley) were found in abundance. Digitalis (foxgloves) have been transplanted into the area.

100 whips of Malus sylvestris (crab apple) and Prunus avium (wild cherry) have been planted in the wild life border in autumn.

450 miniature narcissus have been planted on the embankments.